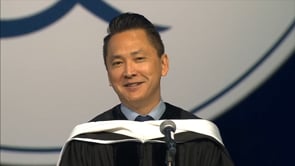 Good morning, Franklin and Marshall College! It’s such a pleasure and an honor to be here with you on this day of gratitude and hope and relief and funny hats that do terrible things to your hair.

Congratulations, graduates, on your wonderful accomplishment. Congratulations, parents, on the even more wonderful accomplishment of raising young adults like these. This is a happy day, but honestly, one that always leaves me with mixed emotions, for as I look out upon all these optimistic, youthful, unlined faces, ready to embark on their life’s journey, I am reminded once again that I am more than halfway to death.

I’m a writer and I live in Los Angeles. When I tell people in LA that I’m a writer—no one cares. I’m used to it. I was an English major. People would always ask, “What are you going to do with an English major?” I wish I had the foresight and the fortitude to say, “Win a Pulitzer Prize?” More modestly, I should have said, “Find my voice.” That’s what I’m talking to you about today.

No matter what you majored in, what career you envision for yourself, you’ll need to find your voice.

My journey to finding my voice and becoming a writer started at Fort Indiantown Gap, less than an hour away. My family arrived there in 1975 as refugees, fleeing the end of the war in Vietnam. Being a refugee was quite traumatic. But it wasn’t all bad. Being a refugee left me with the requisite emotional damage necessary to become a writer.

Being a refugee also leaves me with an opinion that not all of you may agree with, which is that I think refugees—and immigrants—make America great.

One of the founders of your college wouldn’t agree. In 1751, Benjamin Franklin asked: “Why should Pennsylvania, founded by the English, become a Colony of Aliens, who will never adopt our Language or Customs, any more than they can acquire our Complexion.”

The aliens he was talking about? The Germans.

Speaking of greatness, my older brother was ten years old when he came here. Seven years later, he graduated as his high school’s valedictorian and went to Harvard. Then, just to make my life harder, he went to Stanford medical school. Which is what you’re supposed to do—when you’re Asian.

I’m very proud of my brother, but I don’t think our refugee and immigrant policy should be based on whether refugees or immigrants can become doctors, presidents, or Pulitzer Prize winners. You shouldn’t have to be exceptional to be let into this country. I for one believe in a United States of America that is equal for all, where refugees and immigrants have the right to be…mediocre, just like every other American.

Now, you have just spent four years of your life here, and probably many years before, trying not to be mediocre. I’m here to give you permission to fail. Your parents might not want to hear that. But you should listen to Samuel Beckett: “Ever tried,” he wrote. “Ever failed. No matter. Try again. Fail again. Fail better.”

In my case, I’ve failed a lot as I tried to find my voice, although I had one early success. In the third grade, I wrote and drew my first book, “Lester the Cat.” Lester was an urban cat, stricken with ennui. Bored with city life, he fled to the countryside. There, in a hay-strewn barn, he found love with a country cat.

Much more typical of my writing career was my first creative writing workshop at the University of Communists at Berkeley with the writer Maxine Hong Kingston. Every day I would enter her seminar of fourteen students, sit a few feet away from her, a writer whose book "The Woman Warrior" was reputed to be the most widely taught book on college campuses, and every day —
I would fall asleep. Maxine gave me a B+, which may not seem that bad, except that a B+ is … an Asian F.

No one thought I had the talent to be a writer. But I never gave up. Over the next twenty years, I failed again and again and again. If you’re one of those people who’s never failed at anything, who’s never fallen asleep in class, who’s always been good at what you do — I hate you. We all do. For the rest of us who have failed, the lesson is: persistence is more important than talent.

Expect failure along the way. Forgive yourself for failing. Realize that failing can be learning. Each time I failed, I was one step closer to finding my voice.

That was important to me because I grew up when America was fighting its war in Vietnam all over again, this time on screen. I watched almost all of Hollywood’s Vietnam War movies, an exercise I recommend to no one, especially if you are Vietnamese. Vietnam was our country and this was our war, and yet our only place in American movies was to be killed, raped, threatened, or rescued. Our role was to scream, cry, beg, or curse, and if we could say anything at all, it was either “Me love you long time” or “thank you” for being saved.

Like many other so-called minorities, we were distorted by stereotypes or erased by ignorance. The solution for many of our parents was to make their children doctors, lawyers, engineers, and so on. All respectable and necessary occupations. But, as Maxine Hong Kingston has written, we need more than necessity. We also need extravagance. We need storytellers too.

As I tried to become a storyteller and find my voice, I worried about whether I was pleasing people. Writing my first book of fiction, “The Refugees,” I worried about whether editors, agents, reviewers, and readers would like the book. And what about my parents? What about Vietnamese people? My voice was in that book, but it was somewhat muted, out of fear.

With my next book, “The Sympathizer,” a novel about the war in Vietnam where the Vietnamese are at the center of our own story, I was done worrying about what others thought about me. I wrote “The Sympathizer” first and foremost for me. I didn’t care whether or not people liked what I had to say. And by not caring about what other people thought—I found my authentic voice.

But I ran into a problem. The first major review of the novel said that Viet is the voice for the voiceless. And I thought—no! Have you ever met any Vietnamese people? Been to a Vietnamese restaurant? Visited a Vietnamese home? We’re really, really loud.

As Arundhati Roy puts it, “There’s really no such thing as the ‘voiceless.’ There are only the deliberately silenced or the preferably unheard.”

What I want for each of you is to reach that moment of absolute authenticity when you discover what you truly believe in, and when you find the will to assert that truth. But what I also hope is that when you find your own voice that you do not try to be a voice for the voiceless. Instead, your challenge and mine is to listen for unheard voices and to abolish the conditions of Voicelessness.

This is how we change our individual stories as well as the collective story of this country, expanding it so that our country’s story excludes no one and includes everyone.

So, parents, don’t discourage your children from finding their voices, even if they’re different than yours. Let them be extravagant.

And for those parents with artistically inclined children, I have a special appeal: encourage your artists and actors and dancers and singers, for they bring beauty to the world, and there is nothing more necessary than beauty. Nurture your poets and writers and storytellers, so that one day, they will find their authentic voices and finally sit down to write scathing memoirs featuring you.

"Try to find that one thing that inspires that much passion in you. Expect failure along the way. Forgive yourself for failing."
Viet Thanh Nguyen
Next Story

Recent stories from 2022 Citations and Remarks

Members of the Class of 2022, we are unique—our Commencement is the first to be held in person and...

Graduates of 2022, I salute you. I am humbled and heartened by what I’ve learned from and alongside...