We are pleased to announce a new series of fora, Dialogue in Action (DiA), to be offered in the Spring of 2019. These will follow up on certain topics and themes explored in the 2018 Day of Dialogue. The goal of these fora is to incorporate ideas from the original DoD discussions and reach additional participants. We are grateful to the organizers who agreed to sponsor them again. Topics will include:

Details about these events will be forthcoming. Some events will be sponsored during UnCommon Hour on Tuesdays 11:30-12:35. While we recognize that this is not accessible to all members of the community, a mid-day event during which time classes are not typically scheduled, offers some flexibility in our crowded days.

Celebrating Our Identities, Reinventing Our Community:

F&M’s 2018 Day of Dialogue creates a space and time in which members of the F&M community can come together to explore and strengthen our community. It challenges us to recognize our diversity, our commonalities, and our relationships with one another. The day includes events and activities that give us the chance to ask: What does it mean to be part of the F&M community? How does this shared identity interact with the other identities we bring with us, those we acquire while we are here, and those we hold privately? How do we understand ourselves and our community in the context of our history? How can we convert dialogue into meaningful action for our future?

We are F&M.  Join in the dialogue. Turn dialogue into action.

After a Day of Dialogue, Talk Turns to Action 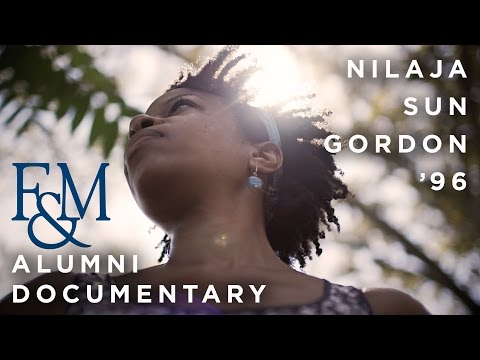 Nilaja Sun Gordon, Class of 1996, is an actress and playwright who has used her singular talent to express her humanity, to bring people together, and to raise awareness of critical social issues. Ms. Gordon, who holds a degree in Theatre, Dance and Film from Franklin & Marshall, is the author of the Obie Award-winning, one-woman performance "No Child…,"which had its initial off-Broadway run at the Barrow Street Theatre from July 2006 to June 2007. The work is an exploration of the New York City public school system and the issues confronted daily by students -- from sex, race, and violence, to language, self-esteem, and community. It is also a spotlight on great teachers and their ability to inspire, motivate and transform students through the clash and clamor of the classroom. New York Times theater reviewer Anita Gates wrote that Ms. Gordon's play "makes a strong, heartening case for the transformative power of theater." For her creation and performance of "No Child…", and its subsequent national tour, Ms. Gordon garnered 21 awards, including an Obie, a Lucille Lortel Award, two Outer Critics Circle Awards, a Theatre World Award, the Helen Hayes Award, and two NAACP Theatre Awards.

Turning Dialogue Into Action: Moving Past the Conversations to Effect Inclusivity on Campus and Beyond

Through her lecture and performance, Kemp will help the F&M community re-examine some of the ideas, struggles, anxieties and suggestions learned during the Day of Dialogue and present, explore and discuss ways in which we can channel that energy into concrete action plans to effect tangible change towards full inclusivity on campus. Kemp’s familiarity with the previous DoD event, along with her experience while teaching at F&M, will provide a unique, sincere, and enlightening perspective.

This talk was proposed by the Day of Dialogue Committee and is sponsored by the Office of the Provost and the Center for Liberal Arts and Society.

Download the App. See the schedule (for F&M Community Members only).

The general schedule for the day will be as outlined below.  Specific locations and additional program details for concurrent sessions will be listed in the Day of Dialogue app, available via the link below.   We look forward to seeing everyone on September 26th! 8:30-9:30 AM  Facilitated Breakfast: “Sticky Situations.”  10:00-11:15 AM...

Day of Dialogue Guidebook App (For F&M Community Members Only)

From "The Science of Ancestry Testing:  Medical Marvel or Modern-Day Snake Oil?"  to "Trans Trivia", Day of Dialogue will feature a wide variety of workshop sessions and activities designed to engage our entire campus community.  Use the link below to see a sampling of the sessions that will be available on September 26th!

The Day of Dialogue is just one of many related programs taking place this academic year.  Several upcoming Common Hour events this fall will explore topics of identity, diversity, and inclusivity.  If you have an event to add to this list, be sure to tag your event as a "diversity" event so it will appear on this list. Use the button below to...