It appeared as two simple words on this year’s Orientation schedule for first-year students at Franklin & Marshall. But those words carried the weight of a serious responsibility:

Delivered through interactive presentations by upperclass students and professional staff, the lessons offered by The Talk were clear: Respect for one another. Look out for each other. Intervene if situations become uncomfortable.

The two-hour Orientation discussion was just one part of the College’s wide-ranging efforts to prevent sexual assault. With heightened awareness of the issue nationwide, F&M has been creating new opportunities to work with students, parents, alumni and community advocates to enhance programming.

Expansive efforts to prevent and respond to sexual assault place the College at the forefront of schools implementing programs urged by the federal government, according to F&M’s Title IX Coordinator, Jan Masland, CRNP. Those efforts include training and education in preventing and addressing sexual misconduct that the College has provided to students for more than a decade.

But the College always is looking for ways to do more.

“We’ve long been focused on the issue and we want to continue that approach,” says Masland, who is responsible for coordinating F&M’s sexual assault prevention resources and response under Title IX, the federal gender-equity law.

F&M President Daniel R. Porterfield, long an advocate for survivors of sexual assault, both at the College and at Georgetown, his prior institution, said, “Our job is to make all students feel safe. We want them to be able to identify and report misconduct, believing that they will be treated fairly and supportively. We also want to educate the student body to be engaged community members and to work actively to prevent sexual assault and any form of gender discrimination.”

The Talk was one part of a newly expanded, yearlong program to prevent sexual misconduct and guide students in developing new ways to promote safety, inclusiveness and an environment of mutual respect. A key part of the enhanced programming is bystander intervention, in which students stop sexual violence before it occurs.

“Sexual misconduct doesn’t have to happen,” says Mike DiAntonio ’15, president of the F&M student group Men United Against Sexual Assault (MUASA), which presented a skit with other student leaders for incoming students highlighting the importance of bystander intervention. “We want first-year students to know that when they see a potentially uncomfortable situation developing at a party or anywhere else, they should say something.… We should be looking out for each other.”

The issue of sexual misconduct prevention and response has gained unprecedented national attention since April of this year, when the White House called on colleges and universities to examine their policies and practices to ensure they include decisive measures for preventing sexual violence and also comprehensive support for students who report assault.

The White House released a 20-page report with recommendations of best practices for colleges. At the same time, the U.S. Department of Education's Office for Civil Rights (OCR) published a list of schools from which it had received a complaint relating to sexual discrimination or assault.

F&M appears on the OCR’s list, along with 88 other institutions as of October 2014. In a letter to the College about F&M’s case, the federal agency describes its role as “a neutral fact-finder.” The College is working with OCR to be fully responsive to its inquiries.

Addressing sexual misconduct on a college campus often means influencing campus culture, says Associate Librarian Lisa Stillwell, who has been part of the College’s efforts to prevent sexual assault for several years. She was on a task force in the mid-2000s that proactively assessed F&M’s policy, practices and procedures to ensure that they were as effective as possible.

“One of our goals was to change the campus culture,” says Stillwell, who currently serves on F&M’s Committee on Sexual Misconduct. “It was not only a matter of educating students about sexual misconduct—it was also about having a fair hearing process, and encouraging survivors and bystanders to come forward.”

Efforts to prevent sexual assault at F&M and around the country increased in 2011, when OCR released a letter requiring institutions to take immediate steps to help prevent sexual harassment and violence. “We have continued to improve our efforts since then, and responded to new OCR guidance to ensure that our students are educated, aware, and safe,” Masland says.

F&M also enhanced its student programming in advance of the 2014-15 academic year. In addition to “The Talk” at Orientation, all first-year students watched a 30-minute video titled “Lasting Choices,” and an all-campus discussion about campus culture took place in late October. In November, the national theater company “Speak About It” will visit campus to present interactive programs about sexual assault prevention.

The Alice Drum Women’s Center continues to host “A Week Without Violence,” while hundreds of students annually attend Take Back the Night to raise awareness of sexual violence. Numerous other programs and discussions take place on campus throughout the year.

The programs are part of an approach “to empower students to report allegations,” says Dean of the College Margaret Hazlett, who oversees the Title IX office.

Reports often increase when institutions have effective support systems in place, says Abigail Boyer, assistant executive director of programs at the Clery Center for Security on Campus, a nonprofit organization dedicated to preventing violence, substance abuse and other crimes on college and university campuses.

In responding to the White House’s call to enhance policies and practices around sexual misconduct, Porterfield wrote a public letter earlier this year to all members of the College community to intensify efforts to prevent and respond.

“We must always be a community in which complaints can be brought forward safely, and in which they will be investigated and addressed expeditiously and in compliance with the law and our own expectations of ourselves,” Porterfield wrote in April, informing the campus community that F&M would appear on the OCR list. “At the same time, we must redouble our efforts toward prevention education.”

Such efforts also extend to the F&M alumni community. Recent grad and Lancaster resident Arissa Brown ’14 is working with the new organization Alumni United for Campus Safety and Accountability. The group has reached out to all schools on the OCR investigation list in a spirit of partnership to encourage alumni to rally around the prevention of sexual assault.

“We have 25 schools behind us so far, including F&M, Amherst, Occidental, Brown, Harvard, Dartmouth and Swarthmore,” says Brown, who was co-chair of F&M’s Alice Drum Women’s Center board last year. “We want alumni to give back by thinking of the safety of our students. I know far too many students who felt uncomfortable coming forward until they became alumni.”

Meanwhile, students such as DiAntonio remain hard at work raising awareness about sexual assault on campus.

“If you can address healthy relationships and healthy socializing, it can all branch into making people feel more comfortable,” DiAntonio says. “The F&M community has many resources for support, and we want to reinforce that.”

“Our job is to make all students feel safe. We want them to be able to identify and report misconduct, believing that they will be treated fairly and supportively. We also want to educate the student body to be engaged community members and to work actively to prevent sexual assault and any form of gender discrimination.” 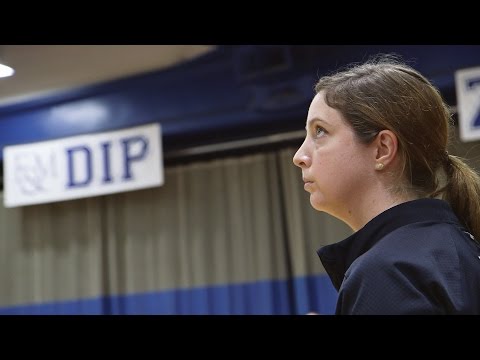