The road to college passes through Lancaster this summer for another 74 high-achieving high school students, as Franklin & Marshall College renews a three-week program that already has helped propel hundreds into many of the country's top institutions of higher education.

It is the largest and geographically most diverse group of students ever to enroll in F&M College Prep, which launched in 2011 with 23 students but quickly swelled to 61 participants in 2012 and 71 students last summer. This year's participants, all rising high school seniors, arrive in Lancaster from as far away as Los Angeles and Portland, Ore., and represent high schools in cities including Austin, Tex., Newark, N.J., New York, Chicago, Memphis, Detroit, Boston, Houston, New Orleans and Washington, D.C.

Sixteen students from Philadelphia and rural high schools in Pennsylvania, including three from Lancaster's McCaskey and McCaskey East high schools, are counted in this year's cohort. They began their two-a-day classes taught by College faculty on July 7 in subjects ranging from the "Archeology of the Andes" and the "Meaning of Myth" to "Introductory Filmmaking" and the "Politics of Food and Agriculture."

Students also have the opportunity to engage with invited speakers such as 1978 F&M alumna Marilyn J. Suiter, program director for education and human resources with the National Science Foundation and a fellow of the American Association for the Advancement of Science, and School District of Lancaster Superintendent Pedro Rivera, a first-generation graduate of Penn State and Cheney universities, and the only Latino superintendent in Pennsylvania's more than 500 public school districts.

In addition to their two seminar style courses, each student will take workshops to help them navigate the college admission process and promote their personal development. They also live in-residence, enjoy athletic, recreational and social events on campus, and will tour the museums and historic sites in Washington, D.C., during a planned daylong excursion in the nation's capital.

"These are the types of students that are made for a liberal arts education. They are excited about learning, and they are excited about sharing what they learn with others," said Molly Thompson, a Class of 2013 graduate who is now a counselor with Pennsylvania College Advising Corps (PCAC) at Juniata Valley High School in Huntington County.

More than 90 percent of College Prep students to date have gone on to enroll at four-year colleges, including Harvard, Brown, Stanford, Georgetown, and Bucknell universities, the University of Texas-Austin, Pomona College, Trinity College, Spelman College, and Franklin & Marshall.

The Posse Foundation, College Board, "I Have A Dream Foundation," and other nonprofit college readiness organizations have lauded F&M College Prep as a program that really works. National media such as The New York Times, Washington Post, and Christian Science Monitor also have noted F&M's success in reaching high-achieving, lower-income and first-generation college students.

The program is provided at no cost to students, who each receive a $500 stipend at the conclusion in lieu of the money they might have earned working in a summer job.

"When the program first started, there were existing relationships with a number of K-12 partners like KIPP and they were really the primary source for our first groups of students," said Donnell Butler, senior associate dean for planning and analysis of student outcomes. "But, as we've grown and proven more and more successful, we've seen an influx of interest from some organizations we've not had a relationship with before, and so we had the discussion last year about opening things up nationally, which we've done, and that's why we see so many more schools and organizations from around the country sending us students this year."

Although not all fill out ethnic surveys, from the roughly half of program participants who did submit the information during the past three years, 50 percent are African American and 24 percent are Latino. Most are the first in their family with real prospects for higher education.

"Our goal is to inspire students to attend college, whether they attend F&M or someplace else," says F&M President Daniel R. Porterfield. Since January, Porterfield has been invited to the White House three times to represent Franklin & Marshall as a national model for expanding educational opportunity for prospective college students from all socioeconomic backgrounds.

National and state goals are to reach 60 percent of working adults with a two- or four-year degree by 2025. Pennsylvania has a long way to go; currently, only 38.6 percent of the state's 6.7 million working adults hold a college diploma. The national average is only slightly better, at 41.5 percent (U.S. Census Bureau).

The program reflects F&M's commitment to embracing students from what Porterfield describes as "the full American mosaic," seeking out and educating the country's top scholastic talent regardless of their backgrounds, empowering all with a first-class education.

Porterfield demonstrated that commitment himself when the former literature professor taught a one-day seminar July 6 on the book "The Circuit: Stories from the Life of a Migrant Child," by Francisco Jiménez. 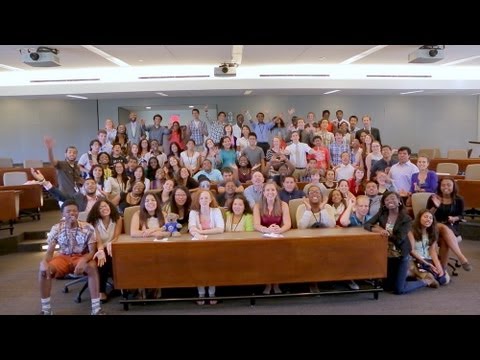 Sana Rafi ’06 Delves Into Her Childhood to Bring...

One clear strength of Franklin & Marshall College throughout its 235-year history is its...