Transgender Health and the Changes Occurring in the Gender Binary

Pennsylvania Physician General Rachel Levine, one of the few transgender public officials in the nation, began her Jan. 19 talk on transgender medicine, gender identity and sexual orientation at Franklin & Marshall College by discussing the meaning behind each letter in LGBTQQIAAP.

“LGBT is lesbian, gay, bisexual and transgender,” said Levine, who appeared at F&M’s Common Hour, a community discussion that is open to the public and held every Thursday that classes are in session during the semester. “The first Q is often questioning, those who might question their sexual orientation or their gender identity.”

The 58-year-old physician, a professor of pediatrics and psychiatry at the Penn State College of Medicine, said, “The second Q is queer. Now, for people my age … queer was a very negative, derogatory term, but the term, 'queer,' has really been taken over by the LGBT … and many, especially young, people cling to this term and identify themselves as queer.” 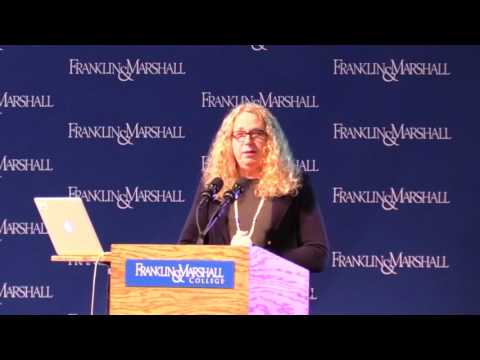 “The last A are allies, and allies are not those under the rainbow, so to speak, but support the community and we are very, very grateful for allies to our community,” Levine said. “P could mean pansexual, polysexual, pangender, polygender and there are lots of other terms.”

“Gender role is what sort of role you might have in your family, your community, in society, and gender roles have obviously changed dramatically in the last 50 to 75 years, at least in Western culture,” said Levine, who offered her 92-year-old mother as an example. “My mother was the only graduate female law student at Boston University in 1946.”

Sexual orientation and transgender overlap, Levine said. A transgender male may like women or men or both or neither, and the same with a transgender female.

As with society, Levine said medicine is working to catch up to changes in a world no longer exclusive to the gender binary by creating access to transgender health care, training programs for psychiatrists, doctors and surgeons, and new treatment guidelines for gender non-binary individuals.

Levine, who was appointed to the post of physician general by Gov. Tom Wolf, said going through the process of changing your gender “is not easy. It rocks your world and its rocks the world of those around you.”