Newly inaugurated as the 16th president of Franklin & Marshall College, Barbara Altmann told a large audience at her Oct. 27 installation that the course she charts for F&M’s future builds on its traditional academic strength, argues for liberal arts’ intrinsic value, and embraces change.

“Our task at hand is to continue to make the case that the education students can get here at F&M is exactly what each successive generation of leaders needs to be those learned people who can wisely rule the world,” Altmann said.

In that task, she said, “We need persistently to convince our critics and demonstrate to the very best minds that for their own good, their quality of life, the quality of the communities they will live in and lead, they need to learn broadly and cultivate their curiosity.”

"I stand before you as living proof that majoring in something relatively obscure is no impediment to getting a real job. Why wouldn’t we want to guide our best and brightest to learn to navigate the world, and get ready to rule it well, through any field of study that excites them?"
Barbara Altmann

Altmann, who received three standing ovations, assumed F&M’s presidency in August. Prior to her appointment by a unanimous vote of the Board of Trustees, she served three years as provost for Bucknell University whose president, John Bravman, was seated on the dais with her.

“When he hired me as his provost, he said, with great generosity, that he would teach me everything I needed to know in case I wanted to be a president myself someday,” she recalled. “Neither of us could have anticipated that I would be quite such a fast learner, but surely the success of the student reflects on the excellence of the teacher.”

Bravman, who gave the opening remarks, said jokingly, “Let me tell you how angry I am that you stole my provost.” Then he advised the assembled faculty, administrators, board members, alumni and students about the person they hired.

“You have chosen well. You have chosen wisely. And you have chosen a very special, authentic, genuine scholar-educator who is prepared and eager to lead,” Bravman said. “As you work together to build the next best possible version of Franklin & Marshall, and in the best traditions of academic inquiry, I urge you to learn from one another, to ask tough questions, but to do so in a way that respects the conversation and the institution.”

As wind and rain from a nor’easter pelted the campus outside the Alumni Sports and Fitness Center, F&M’s first woman, and, as she likes to joke, first Canadian president recognized the College’s last four presidents. Read Altmann's inaugural address here.

“We have the privilege of having four previous F&M presidents with us today,” she said. “We have Presidents Dick Kneedler, John Fry, and Dan Porterfield as well as Interim President Eric Noll present. Thank you for being here to witness this transition, this handing over of the baton.”

Secretary of the Faculty Barbara Nimershiem said the faculty welcomed Altmann, a French medievalist whose scholarship is well regarded in her field, as “a woman who shares our values” and is “committed to the liberal arts.”

In her remarks as mayor of Lancaster, Danene Sorace said that after her initial meetings with Altmann, she believes the F&M president will work as a partner.

“She understand the tensions that go beyond just co-existing,” Sorace said.

In addressing part of the new mission of the College, Altmann said, “On our campus, good as we are, our mandate now is to avoid the temptation to hold steady, content with the impressive gains of the recent years,” Altmann said. “We need to find the balance between acquired (and well-deserved) confidence and the call to our own journey of perpetual learning.” 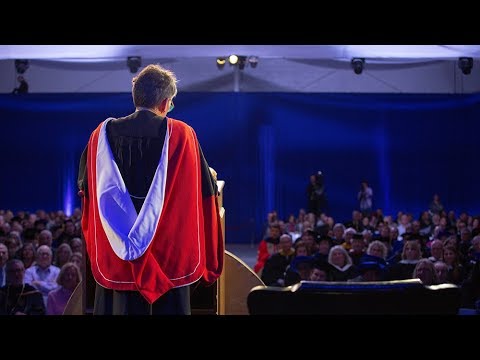 “We have to make the case to the outside world that this culture of possibility is far too good to turn down. If we inculcate in our students the qualities of flexibility, curiosity, nimbleness, and the ability to tell our stories, we must remember to do so ourselves as an institution.” Helping to Save Bird Population Decline

With an estimated decline of 3 billion avifauna in North America since 1970, two Franklin &...

Normally a constituent services specialist for the governor's office, Chris Howe-Smith ’19 is one...