Acting is Essential in Storytelling Performances

April Armstrong has appeared on stage, screen and television as an actor and singer. She also uses her craft for her storytelling performances, one of which she will bring virtually to Franklin & Marshall College at 8 p.m. Sept. 8 at Brooks College House.

Armstrong recently discussed the difference between a one-person show and a storytelling performance, which she described as essentially inhabiting the character of the story the performer is telling.

But there is a difference, said Armstrong, whose acting credits include NBC’s Law & Order SVU, the national Broadway tour of “Ragtime” and the film “Washington Square.”

“A storyteller is asking the members of the audience to conjure up their own image of what is happening to the character of that story and then make a direct correlation to a feeling that they have had. In acting, that character is going to go through a lot of changes at a very intense time and the audience is going to watch you do it,” she said. “They’re going to watch you literally go through all of that right in front of them, and they don’t have to imagine anything because it’s happening right in front of them.

“The storyteller is the narrator as well as all the characters, and they are also the chorus commenting on the issues and emotions at hand and offering permission for the listener to feel and then, draw their own conclusions.”

Armstrong, who earned a master’s degree in music education from Teachers College, Columbia University, tells multicultural folktales that include African American and Latino stories. In her storytelling performances, like the West African folktale “Why the Sun and the Moon Live in the Sky,” she combines live music and singing.

Read more about Armstrong and watch some of her performances here.

More storytelling is scheduled this fall at Franklin & Marshall with a storytelling workshop by Jamie Beth Cohen at 8 p.m. Oct. 13-14. 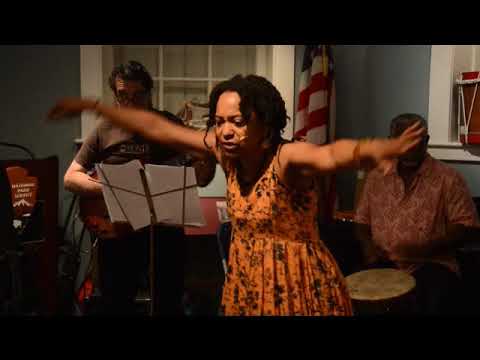 French Connections: Where Students and an Artist Meet

An F&M professor and her Connections I class spent an afternoon with a painter, associated with the...