The New College House has been shaping the academic landscape of Franklin & Marshall College for nearly a decade.

But it was missing one thing: a permanent name.

Now that has changed, thanks to a $6.5 million gift from Dr. Robert ’54 and Anna Roschel to rename New College House as Roschel College House. The Roschels' contribution brings F&M within $23 million of the Now to Next Campaign’s $200 million goal.

“We are so grateful for this breathtaking and extraordinary gift, and we are delighted to have the opportunity to celebrate your philanthropic leadership,” Altmann said.

Opened in fall 2011, New College House was the fifth addition to the College House system. Set at the northwest corner of campus, the building houses nearly 200 students in doubles, suites and apartments.

“Upon its completion, the newest house seemingly had everything. Except, of course, a name,” Altmann added.

Dr. Roschel majored in biology at F&M. The 1954 graduate continued his education at the University of Pennsylvania and launched a successful career in dermatology after serving in the U.S. Air Force.

“I owe my career to F&M,” Dr. Roschel said. “You look back on your life and you look at contributions that different organizations and people have made to you.”

“F&M has been a big part of my success,” he said, and added that “education in general, of course, is very important, especially this day and age.”

In quintessential liberal arts fashion, Dr. Roschel was active in the drama newsletter, glee club, choir and the Green Room Theatre. His legacy appears on another campus building: The Roschel Performing Arts Center.

He was a member of the American Association for Applied Sciences and is still a member of Phi Beta Kappa.

As an alumnus, Dr. Roschel remains closely connected to the College, previously serving as a Reunion Volunteer and member of Leadership Council and currently serving as a member of the Board of Visitors. Over the years, he has provided leadership on fundraising initiatives, including serving as co-chair during a past comprehensive campaign.

In 2017, the Alumni Association Board presented him with the Alumni Medal in recognition of sustained, distinguished and outstanding service to the College.

In many ways, the Roschel College House embodies F&M’s growth since its namesake first arrived on campus 70 years ago.

“The college back in the early ’50s was somewhat different than it is today,” Dr. Roschel reminisced. “The physical structures themselves have more than doubled in size. And the facilities are so much better. But not the education level. Even then, the education level was very high.”

“Indeed, it was so high that all the people who survived the severe curriculum of the pre-med courses got into medical school – and believe me, that was an accomplishment,” he said.

“I am confident the House’s members, past and future, will be honored to have such a powerful name to be known by,” Altmann said.

"I owe my career to F&M... You look back on your life and you look at contributions that different organizations and people have made to you.” 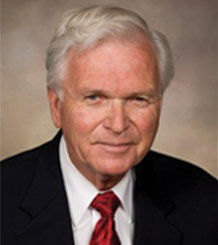 Established in 2005 by former F&M President John Fry, the College House system shapes the intellectual, social and physical landscape of the F&M campus.

“A student’s College House is their first home when they come to F&M. It is the place where they make their first friends at bagel breakfast, attend their first class in the house’s seminar room, and begin their first steps into college life and independence,” F&M President Barbara Altmann said.

The houses serve as “third spaces” where students and faculty can come together for informal discussions and gatherings. Students take on leadership roles as House Advisors and members of their house government and collaborate on a constitution that serves as the house’s guiding document.

“The house system was designed to create this third space, this integration of the intellectual life of the college – the academic sphere – and residential life,” said Matthew Butterfield, Roschel College House don. “It’s a place where students can continue the intellectual life in more informal settings.”

“The title spoke to my own discovery of the complex ways in which students connect, inspire, learn and contribute that went well beyond anything I understood from the classroom. We were all partners in this adventure,” he said.

Forging the Path for Those Who Come Next

“Look at who you want to be, find that person, and ask them how they got where they are.” Sophomore...

A research project to evaluate whether positive human interactions improve the welfare of leopard...

The ‘Secret’ of Genitalia, Gender and Biology

To look at Emily Quinn, a young woman with an infectious smile, she is female. Yet, her body,...