Who decides where a city’s bus stops go? The parks? The new apartment complexes?

Franklin & Marshall alum Douglas Smith does, to an extent. As chief planner within the City of Lancaster’s Department of Community Planning and Economic Development, he oversees comprehensive planning, land development, historic preservation, zoning, flood-plain review and the City Redevelopment Authority.

Smith ’09 shared insights with his alma mater at an Oct. 14 virtual Common Hour, “A Comprehensive Plan for Lancaster: Working Toward a Green, Safe, and Equitable City.”

“Urban planners are often the brokers of these kinds of deals – coordinators, helping to pull together disparate interests and mediate them toward solutions that will hopefully create sustainable, safe, and more prosperous communities for everyone,” Smith said.

Lancaster hasn't undertaken a city comprehensive plan in 27 years, but a new effort strives to create an inclusive, data-driven, green and future-looking plan for the next 20 years. 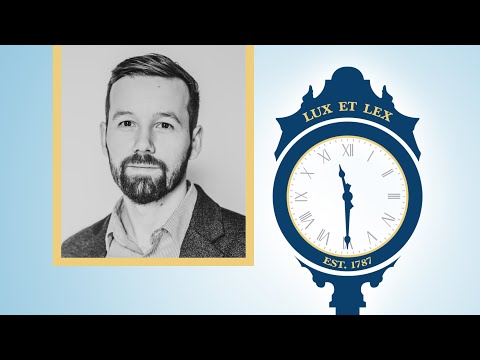 Smith is one of the driving forces behind the City's Climate Action Plan, greenhouse gas inventory, and other greening efforts in the city.

But before looking to the future, Smith acknowledged Lancaster’s past.

“I would be remiss if I did not emphatically state that like many professions, urban planning has a deeply racist and classist history. Unfortunately, these seeds of hate are still buried through our own community,” he said.

Smith recommended the late F&M Professor David Schuyler’s book, “A City Transformed: Redevelopment, Race, and Suburbanization in Lancaster, Pennsylvania, 1940–1980,” for a deeper look at the legacy of redlining and demolition of communities of color.

Lancaster’s diverse population is approximately 38 percent Latinx, 17 percent Black and 7 percent other races. In 2017, the city was named the refugee capital of the United States by BBC News.

“This is really just the tip of the iceberg of the diversity that we have in the city, which is an incredible asset to our culture, our arts, our food and in many other ways. This is something that we're really trying to embrace and lift up through the planning process,” Smith said.

To demonstrate the interactive side of urban planning, Common Hour viewers participated in a live poll. Browse a sampling of responses below, or view the full results.

"[Diversity] is something that we're really trying to embrace and lift up through the planning process."