From Alaska to Lancaster: A Student’s Journey

From racing in the Iditarod to examining the state’s museum archives, Guernsey holds a unique knowledge of Alaska’s topographical, historical and religious landscape.

“Seward is on the cruise ship line. During normal times, we get a lot of cruise ship travelers. It has everything. It has a national park. It has glaciers. It has the water, the killer whales, the humpback whales,” said Guernsey, a joint religious studies and economics major.

Located on the Kenai Peninsula, the popular destination is home to glaciers, fjords and diverse wildlife.

“I have a strong appreciation for nature from growing up where there's a big focus on knowing about the national landscape, knowing all the plant and animal species, and just having a general knowledge base about the outdoors,” Guernsey said.

In addition to her summer job, Guernsey embarked on research focused on Russian colonialism in the 1800s in Alaska.

The project began as an independent study to explore different aspects of Alaskan history and religion with Rachel Feldman, assistant professor of religious studies. A grant from the Barbara R. and Charles Kahn, Jr. ’47 Endowment for Religious Studies Summer Research and Travel Award enabled Guernsey to broaden her focus.

“I used the funds to visit five different archives in Alaska,” Guernsey said.

She flew to Anchorage, Juneau and Kodiak to access museums, rare archives, and artifacts.

This period of early Russian exploration in North America had a lasting impact, Guernsey learned. She encountered the effects of colonialism on indengenous Alutiiq populations, the effects of the fur trade on wildlife, and the origins of the Russian Orthodox community in Alaska.

It’s not the first time Guernsey extensively explored Alaska. In 2014, she traversed 130 miles as a musher in the Junior Iditarod, patterned after the famous long-distance sled dog race from Anchorage to Nome. She completed several races prior.

Now, Guernsey stays busy with a variety of pursuits in Lancaster. She interns at the Ware Institute for Civic Engagement and is active in S.I.S.T.E.R.S, a women’s empowerment group on campus. After graduation, she hopes to work as a development coordinator in the nonprofit sector.

“I really like working for someplace that has a mission and a wider impact,” she said.

Initially drawn to F&M for its international study programs, Guernsey was quickly captivated by the College’s liberal arts approach to religious studies.

“I like the way they study different religions from an interdisciplinary lens. I am able to study everything under one branch: religious studies, literature, texts, anthropology, sociology.”

"I am able to study everything under one branch: religious studies, literature, texts, anthropology, sociology.” 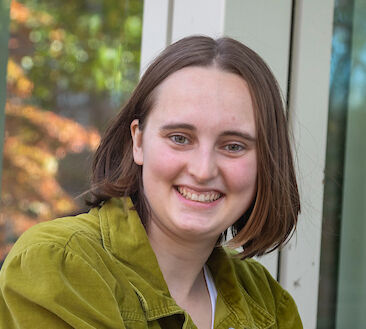