French Connections: Where Students and an Artist Meet

On the subject of African Americans who went to reside in welcoming Paris, a Franklin & Marshall professor and her Connections I class spent an afternoon with a painter, associated with the College for 30 years, who spent time in the City of Light in the 1960s.

Bill Hutson followed the footsteps of such luminaries as entertainer Josephine Baker in the 1920s and writer James Baldwin in the 1940s, but, as he recalled, his experience was not as welcoming.

“All kinds of people had been there before me,” said Franklin & Marshall’s  Jennie Brown Cook and Betsy Hess Cook Distinguished Artist-in-Residence. “I think I’m walking in their footprints before I realize, ‘You know what? I can be on their path, but I’m not putting my feet in their footprints.’”

In the Phillips Museum of Art, Hutson conversed about his life with Associate Professor of French Carrie Landfried and 15 students who this semester are studying “African Americans in Paris.”

“We started with James Hemings, who accompanied Thomas Jefferson by ship as a slave person, and we’re going all the way to Jay-Z and Beyoncé doing a video in the Louvre a couple of years ago,” the professor said.

The 85-year-old Hutson began by telling the students seated in a semicircle, “I’m almost blind, but I haven’t lost my vision. By that I mean, I’ve lost my eyesight, but not my creative vision.”

As a young man, the artist chose to spend time in Europe “Because in the 1960s, I was in San Francisco, and I had a companion who was not a Black person, and we caught hell trying to relate to each other.”

Hutson’s arrival in Paris occurred as France was undergoing tumultuous times. Algeria had won its long-fought war for independence in 1962 and people of color were treated with hostility in some quarters.

“His experiences in Paris differ from many of the African Americans we have talked about so far in class,” Landfried said. “Those experiences reflect a change that started to occur in the 1960s as France's colonies gained independence and the relationships between colonizer and colonized became more visible.”

First-year Kennedy Wilburn was struck by Hutson’s connections to historical figures. “Rather than just reading about someone in a book, we got to see someone up close in person. I found it very interesting that he got to meet artists who we’ve talked about in class.”

In 1969, the Parisian weekly news magazine, L’Express, published a story that began, “Can one be American, Black and a painter? Three artists, exhibited at the American Center for students and artists, say yes. But it isn’t easy.”

Hutson was one of the three artists. He answered a question about why they left America with, “Society there is hostile to the individual creator. It’s not that it’s harder for a Black person to be a painter: it’s hard for him to be a Black person.”

Hutson recalled life growing up in Texas, how after his parents died when he was very young that he just wanted to live, which impressed first-year student Maddie Messer.

“I find myself still thinking about how all he wanted to be when he was older was alive,” she said. “It’s a statement I am in agreement with because it puts all other troubles into perspective.”

The painter also discussed how throughout his life he observed racism with an inquiring mind that in his younger years brought admonishment for looking at society too closely.

“I do look closely,” he said. “My art, if you look at it closely, is about closeness. It’s about differences between light and dark and middle and what happens to it as time passes.”

I’ve lost my eyesight, but not my creative vision. 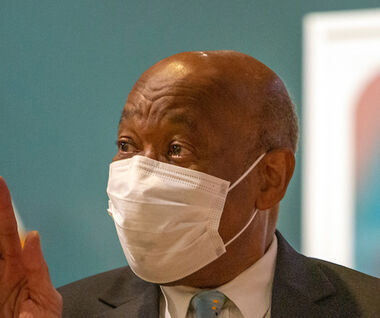