A Diner, a Dream, and a Golden Door

Roger Avila-Vidal ’22 was just an infant when his parents moved the family from Puebla, Mexico, to Lancaster in pursuit of a better life.

An ambitious student growing up, the Franklin & Marshall graduate knew college was a possibility. But his immigration status made that dream seem nearly impossible.

A chance encounter with a prolific F&M benefactor helped change that.

The Avila-Vidals’ story begins 2,400 miles away from campus in Puebla, a city of 3 million surrounded by mountains 60 miles southeast of Mexico City.

“Their main goal was always to give me a better life. Education was a major component of why they brought me here,” said Avila-Vidal, who graduated in May with a dual major in international studies and anthropology with a minor in French.

Hard work, opportunity and a touch of luck converged in a chance 2016 encounter at a Lancaster diner where Avila-Vidal’s parents worked.

“Employees are usually kind of ignored. But she [Barshinger] took the time to just ask them questions about where they’re from. She started asking them about their family,” Avila-Vidal said.

Barshinger has been the College’s most generous benefactor while setting a shining example of service throughout central Pennsylvania.

Her remarkable generosity includes $11.5 million in gifts to support planning and construction of the Ann & Richard Barshinger Life Sciences & Philosophy Building, and with her late husband, the lead gift to create the Barshinger Center for Musical Arts.

In addition, the Ann Boyd Barshinger Scholarship Fund provides need-based financial aid to local students who could not otherwise afford to attend F&M.

“I like to be able to contribute to the present and the future of Franklin & Marshall,” Barshinger said. “It is a very enriching experience to know that, in giving to financial aid, I’m helping support the future of talented young students, who are our neighbors and friends, and also securing the future success of this fine institution.”

When Avila-Vidal’s parents mentioned their son’s interest in college, Barshinger arranged for him to visit F&M.

“I visited 35 different schools before deciding to look in-depth at Franklin & Marshall College,” he said. “Getting to meet students on campus and seeing how active they are in general – not just in academics, not just in clubs, but also student activism – that really caught my attention.”

He fell in love with F&M – but there was a catch.

Avila-Vidal was a DACA student – the Deferred Action on Childhood Arrival program  implemented in 2012 that allowed young immigrants brought to the U.S. as children to remain in the country.

“It was a lot to navigate, especially as a first-year college student unsure of how to approach the application process in the first place,” Avila-Vidal said.

The door cracked open when he found a program called Golden Door Scholars, an organization providing aid to DACA or other undocumented students.

“They have partnerships with a lot of schools throughout the United States. And one of the partner schools when I was applying for that program was Franklin & Marshall,” Avila-Vidal said.

Avila-Vidal’s path to F&M wasn’t easy. But his impact can already be felt. As a campus tour guide and house adviser, he was the first friendly face many prospective and new students saw on campus.

But before Avila-Vidal graduated, he had one more goal – to broaden diversity initiatives on campus through a pilot program introducing Diversity, Equity and Inclusion (DEI) courses to F&M.

In fact, Avila-Vidal helped facilitate a coalition of student leaders to create the programming. He participated as a course preceptor his senior year.

“I’m excited to see that now coming to fruition – to see what we can improve and how we can change this to adjust and be able to help improve the environment on campus,” said Avila-Vidal, who is now exploring graduate school options.

Like so many students who walk under the Lux et Lex arch, Avila-Vidal has changed F&M for the better. And the impact of the conversations between Barshinger and his parents has rippled beyond the classroom.

With Barshinger’s encouragement, the family opened their own restaurant: The Cactus Cafe, in Millersville. The menu features classic breakfast items, with a Puebla twist.

Barshinger was among the first to visit.

"Getting to meet students on campus and seeing how active they are in general – not just in academics, not just in clubs, but also student activism – that really caught my attention." 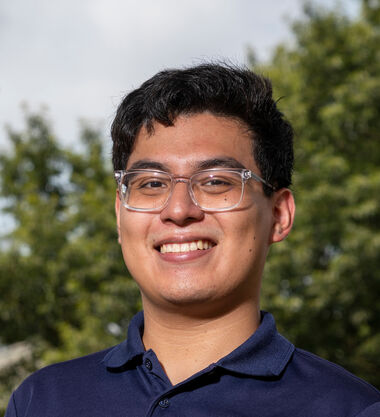