I’m done being in love with what leaves – autumn gathers in the trees, russet, then tries not to fall asleep on the cold ground. God, it is hard being happy if you try – instead, be like this slow yellow. Let go. [“Russet”]

“What I love about poetry is it makes the ordinary extraordinary,” said Young, this year’s F&M Mueller Fellow.

Young is director of the Smithsonian’s National Museum of African American History and Culture in Washington, D.C. He has authored 11 books of poetry and two works of nonfiction. A former Guggenheim Fellow, Young was elected to the American Academy of Arts and Sciences in 2016 and was named a Chancellor of the Academy of American Poets. 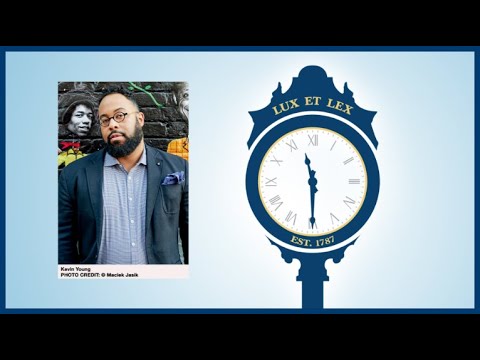 The peculiar cover of “Stones” – a menagerie of plastic figurines – hints at the book’s equally unique contents. The figures represent LEGO pieces that have washed ashore the beaches of southwest England for the past 25 years after a cargo ship spill.

“They're part of the flotsam of daily life. And in some ways, that's what the book is about. It's about a more permanent kind of memorial: These stones that grace two graveyards in Louisiana where my kin are buried,” Young said.

"The stones sort of migrate, but never far, [like] some of the family in the book. There's something solid and powerful about it that I think is really worth remembering,” he said, referencing the poem “Sandy Road.”

The roads here only lately got names. Before, we lived on Rural Route blank… Today the roads remain mostly ditch water & dirt – small stones that migrate but never far.

The Mueller Fellowship Endowment was established in 1980 to bring distinguished national speakers to the College for conversations with the campus community. Young spoke virtually during Common Hour and in a continued conversation after the event.

“I didn't grow up knowing poets or living poets,” Young shared during an audience Q&A.

Something clicked when Young, who spent much of his childhood in Topeka, learned that poet Langston Hughes considered Kansas home.

“His Kansas connection has really been important to me, but also the way he thought about the blues and turned it into poetry. Not to give it the noble nobleness of poetry, but to give poetry the nobleness of the blues and the complexity, the voices. Which also meant writing about everyday folks,” Young said.

From "Stones," by Kevin Young

I want to drink
The day down.
Maybe next

The night—first,
We’ll find
our feet, our feet

the floor. The blue beyond
the window
returns like a mother

after work, collapsing into
the living room.
I’m home. I’m done being

in love with
what leaves—
autumn gathers

in the trees, russet,
then tries
not to fall asleep

on the cold ground,
God, it is
hard being happy

Sana Rafi ’06 Delves Into Her Childhood to Bring...

One clear strength of Franklin & Marshall College throughout its 235-year history is its...