A Student’s Surprising Path to the Director's Seat

Of the many things Shoshana Frank set out to do at Franklin & Marshall College, directing an original play wasn’t one of them.

So how, exactly, did the junior find herself on stage at the Green Room Theatre debuting “Platform 7,” her own work, on Thursday night?

It’s a liberal arts story that’s quintessentially F&M – starring an animal behavior scholar who happens to have a lifelong love for theater.

“There's a theatre program, there's a Jewish community, and there's one of the strongest animal behavior programs in the country,” she said.

Frank, a double major in animal behavior and theatre, contributes to all three on campus. Along with her thespian pursuits, she’s an active member of Chabad and works in the campus vivarium. This summer, Frank completed Hackman Scholar research exploring drug abuse using animal models with Ryan Lacy, associate professor of psychology.

The script for “Platform 7” bloomed outside of a lab, in a playwriting class taught by Brian Silberman, professor of theatre.

“I intended to turn it in at finals and be done with it,” Frank said. “But enough people were like, ‘Hey, this is kind of good. Do you want to propose it for the GRT [Green Room Theatre]?’”

“Shoshana has been tenacious about her pursuit of the play script and dedicated to the subject matter her play engages. I really admire her openness to exploration, her desire to find the proper theatrical expression of a difficult story, and her will to get it staged at F&M,” Silberman said.

Five friends gather for drinks in a bustling city. In a series of short scenes that transition via subway lights and sounds, “Platform 7” chronicles a budding relationship that escalates into domestic violence.

The abuser is never shown – and that’s exactly the intent.

“They're the catalyst, but not the focal point,“ Frank said.

Instead, the plot is portrayed through interactions between a close-knit clique: dinners, phone calls, and other facets of friendship affected.

“Most of the stories that are in the media are about the relationship between the abuser and the survivor. That is not something I wanted to highlight,” Frank said.

In a clever script of role roulette, each cast member plays the main character at some point.

“I’m so proud of the work that they're putting in. It’s not an easy show, subject matter-wise. They’re coming with a lot of emotional vulnerability and energy into a space that is really draining. And I have so much respect for the work that they’ve been putting in,” Frank said.

Frank has plenty of experience acting on stage, but nothing could prepare her for bringing a personal script to life.

“As an actor, one of the things I love is that you're putting yourself out there, but you're not yourself – you're acting as somebody else. But this? This is entirely me. This is my work on the stage, these are the words that I wrote and the blocking (staging) that I created and the characters that I created. So there's nothing to hide behind,” she said.

When “Platform 7” showtimes conclude, there’s one more thing Frank can add to her repertoire: balancing act.

“I feel like I live a double life. Monday is animal behavior class, then directing, and then animal behavior lab. So there's this short hour where I'm in my element in a different way, but it really is two drastically different worlds,” she said.

As the Green Room curtain fell to enthusiastic applause on opening night, it was clear that Frank masters them both.

"There's a theatre program, there's a Jewish community, and there's one of the strongest animal behavior programs in the country.” 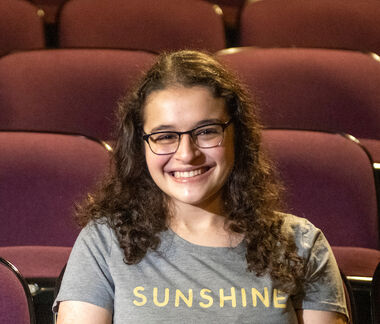 Behind the Scenes at the Green Room Theatre

History seeps from every corner of F&M’s beloved Green Room, from its Art Deco lobby to the control booth high above the auditorium’s 205 seats.

A College compost initiative has evolved into a co-op saving the City of Lancaster $5,215 per year...