A Franklin & Marshall College compost initiative has evolved into a co-op saving the City of Lancaster $5,215 per year – all while diverting 16,638 pounds of food waste from the solid-waste stream each month.

“F&M students have been involved since the outset in helping to inspire and push along the work,” she said.

The idea sprouted in Bratman’s senior seminar for environmental studies in spring 2018. She proposed a pilot initiative and received funding from F&M’s Center for Sustained Engagement with Lancaster to develop the initial model.

Residents began composting in April 2021, with three bin locations in the city of Lancaster (Musser Park, Lancaster Recycling Drop-Off Center, and Culliton Park). Bins have since been added at Linear Park and Buchanan Park, adjacent to F&M.

The program has grown to 250 households. Membership in LCC is free and open to the public; members are required to attend a brief orientation session and participate in occasional compost maintenance workdays.

Prior to this, Lancaster residents had no alternatives beyond their own backyards to divert organic food and garden scraps from the general waste stream.

“Having that quantitative and qualitative data has been really important for informing our efforts and for making the case,” Bratman said.

Over 80% of Lancaster Compost Co-op members are Lancaster City residents. In total, 368 individuals’ worth of food waste is delivered to LCC compost bins throughout the year.

On average, each individual household average drops off 35.33 lbs of food waste per month.  This diverts approximately 16,638 pounds of food waste from the solid-waste stream each month. Annualized, that’s nearly 200,000 pounds of food waste composted into beneficial soil (For context, that’s roughly the same weight as 33 pickup trucks).

Beyond the cost and carbon savings, the co-ops have expanded into microcommunities that share activities such as neighborhood work days and book clubs.

“Our report doesn't fully capture it, but what we're seeing is that it's not just about composting; it's about building community in all these other ways that are fostering social connections,” Bratman said.

Below, meet the team of students involved in recent efforts.

What surprised you about this research? Something that surprised me – or more that I took away from it – was just the true impact and importance of volunteer-led, decentralized initiatives. While interviewing people, you could really see their dedication to being a part of Lancaster Composting cooperatives. Even in some of my classes now – when we talk about governments, for instance – I see how volunteer-led initiatives can actually promote a lot of change.

"I see how volunteer-led initiatives can actually promote a lot of change."

What do you hope for the future of this program? I'm hoping that it's used as a model for other cities. Some of the research that we were doing was looking at this as a model. I would love to see it actually being used as a model for other cities that are similarly sized and for people that want to be involved but don’t want to pay for it, or aren’t able to. I think it opens doors for people.

"I'm hoping that it's used as a model for other cities." 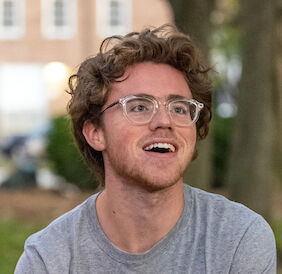 How did you evaluate the LCC’s first year? It was a first-year program evaluation that culminated in a white paper where we talked about member demographics and future possibilities for the program. We did a lot of survey data analysis and also interviewed members.

"It culminated in a white paper where we talked about member demographics and future possibilities for the program."