Franklin & Marshall College first-year student Menelaos Raptis was just 7 years old when he received his first telescope – a surprise gift from his father.

The perfect place for stargazing, Raptis says, is his hometown of Thessaloniki, Greece, a port city on the Thermaic Gulf of the Aegean Sea.

“Through astro-gazing, I was able to develop my imagination and my interest in space – and to form some questions: ‘Is there alien life on other planets? What are the boundaries of the universe?’” Raptis said.

“It was then that I decided to be the scientist who is going to give some answers to these questions,” he said.

Now, Raptis is bringing his passion for planets to a wider campus audience. He pitched and helped facilitate the College’s first Space Week. The event begins today in Ware College House and will feature faculty and visiting speakers exploring the realm of astrophysics – and beyond.

“Franklin & Marshall College is not just a place for students. It's a place for protagonists. For students with a vision to create something new, to promote their passion through their ideas. I feel very blessed that I have the opportunity to materialize that in a top institution,” Raptis said.

In 2017, Raptis was named the youngest European Ambassador of Space after winning an Odysseus II competition, challenging contestants to depict the universe in the future.

“That was the start of a very beautiful journey inside the path of the natural sciences,” Raptis said.

In addition, Raptis is a former member of the Greek EduAct national robotics team and a NASA Hackathon participant. This semester, he will join the team of F&M students analyzing data for NASA’s James Webb Space Telescope* under the tutelage of Ryan Trainor, assistant professor of physics.

“I'm very lucky, because my role model happens to be my professor: Professor Trainor,” Raptis said.

"From the first day he arrived at F&M, Menelaos has impressed me with his passion for astronomy and his perseverance. He jumped right into our research group during his first semester on campus, and I'm very excited to see what we uncover together in the next year while working on this project," Trainor said.

Raptis hopes to follow in the footsteps of another idol: Thomas Pesquet, a French aerospace engineer, pilot and European Space Agency astronaut.

“My biggest goal is to become an astronaut,” Raptis said.

Why did you choose to attend F&M? I'm focused on the astrophysics field, but I'm also aware that a complete personality needs other aspects as well. These are offered here in the liberal arts education.

Coming here includes the exploration of other fields. They're fascinating. One of them is Captivating Spaces, a [first-year] Connections course [taught by Kabi Hartman, director of the program in support of academic excellence and senior teaching professor of English]. That was a great opportunity to combine my scientific knowledge with the philosopher spaces.

“Franklin & Marshall College is not just a place for students. It's a place for protagonists." 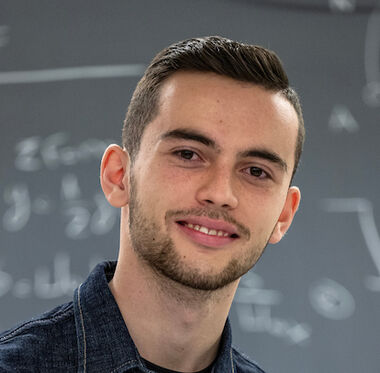 Students Aiming for the Stars

As the James Webb Space Telescope sent Earth stunning infrared images of galaxies in the early universe, F&M students busily helped their professor with final calculations for one of the telescope’s first projects.

Visiting F&M for the first time this winter? Make the most of your visit! From cozy cafes to...